Please bear with me, I will post updates as and when I have a minute.  I am resizing over 200 pictures as I type this.

Wednesday started off like any other day, with the event to look forward to.  I got a phone call from Derek that they would be leaving shortly with an ETA at Kirkwall of around 1300.   The media were duly informed and we awaited arrival.

A short time later, I got another phone call saying the Spitfire had gone tech near Liverpool with an alternator fault and there was a real chance that they would not be coming.   My heart sank in the knowledge that the private viewing at 1800 was going to be a problem without the main event.

The night before, Jim McTaggart had arrived in G-JIII, a starduster biplane which was a planned surprise for the contributors on the night so all would not be lost.

I got a phonecall from Derek shortly after saying the fault had been fixed and they would be leaving shortly with an ETA of 1530.

I was also told that Neil Geddes in his SE5A was on his way and would be arriving at Lamb Holm around the same time.

Dai Heather Hayes was in touch and he confirmed due to the weather he would be arriving at lunchtime thursday.

Sure enough, around 1530 Air Traffic announced the imminent arrival so I will let the photos take over from here! 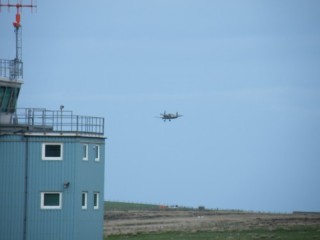 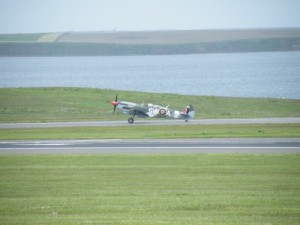 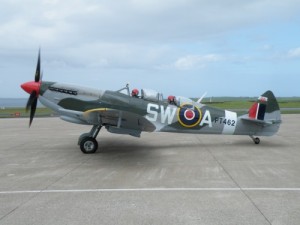 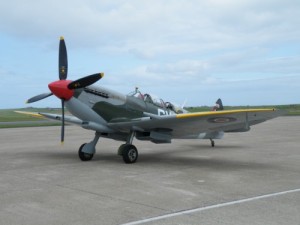 Anthony Hodgson, Spitfire owner and pilot on the left and Derek Mowat on the right 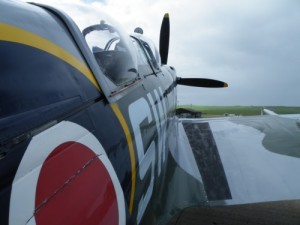 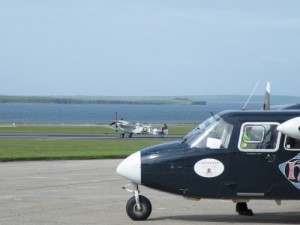