Last week saw one of the busier weeks as far as february goes.  Over and above the normal schedules we had a Subsea Viking crew change and 3 Tucanos overnighting.

One of the pilots, “Wildy”, is the son of Chris and Julia Wild, who are the owners of Craigies Taxis in Kirkwall.  The three aircraft were ZF407, ZF287 and ZF347.

We had a further visit from an Eastern Dash 8, G-WOWB which was livery free on this occasion?

And finally a photograph of aircraft that I rarely feature on the blog.  I don’t think there will be many people who have not seen a Saab 340 in Orkney but someone noticed the livery had changed.  Next the terminal was plastered with stickers and balloons.

It turns out Loganair are now the ripe old age of 50.  A considerable achievement.  In 10 weeks I will reach my half century so its not too bad an age to be 🙂

Here is the new livery with a minor change 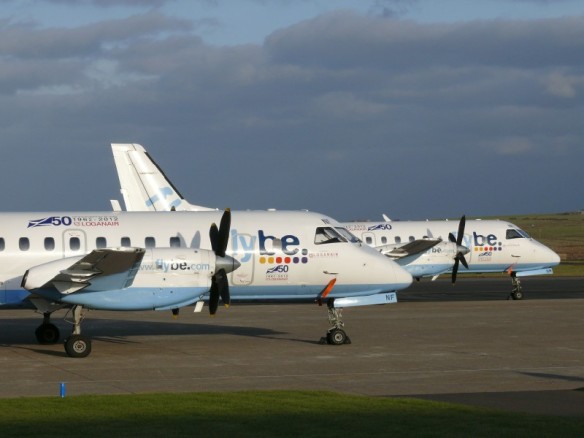 Many happy returns, hope I am around at the centenary!

That’s about it for this week, there have been a number of flypasts by Typhoons and Tornados this week and I seem to have missed each and every one.

A couple of people to mention this week.

Flt Sgt Justin Morris, Happy 50th birthday, hope to catch you for a dram in April.

Nigel Pendrey, my dentist, without him I would have jumped off a cliff yesterday as I was in agony, Absolutely nothing to do with aviation but appreciation where appreciations is due.

All the best from a snow and windless Orkney and as always, thanks for taking the time to read.